Background: To evaluate the normative values of corneal endothelial cell parameters within a group of healthy young Egyptian adults using specular microscopy and to examine any correlations between endothelial parameters and refractive or biometric parameters.
Methods: In this cross-sectional study, specular microscopy was used to study the right eyes of 150 healthy young volunteers and evaluated endothelial cell parameters, including cellular density, hexagonality (HEX), and coefficient of variation (CV) at 15 different points on the back corneal surface, which were later grouped into the central zone and either four quadrants or three annular zones. The same eyes underwent refractive and biometric assessments.
Results: Hundred fifty healthy adults were examined, and the age ranged from 20 to 30 years, with a median of 23 (interquartile range, 21–27) years. The mean ± standard deviation of central cell density was 2902.7 ± 270.7 cells/square millimeter. The superior paracentral area had the lowest mean density (2895.8 cells/square millimeter), but the highest mean HEX (67.7%), while the inferior peripheral area had the highest mean density (3100.5 cells/square millimeter) but the lowest mean HEX (64%). The difference in cell density among the three annular zones was not statistically significant (P = 0.365). However, HEX and CV in the central and paracentral zones differed statistically significantly from those of the peripheral zone (P < 0.001 and P = 0.014, respectively). Weak but non-significant correlations were detected between endothelial cell density and all measured refractive and biometric parameters.
Conclusions: The findings of this study provided useful normative biometric and specular data in a specific age group and a specific population, and could be useful in planning intraocular surgery in young Egyptian adults. However, future longitudinal studies with a larger sample could refine more endothelial cell parameter specifications over time. 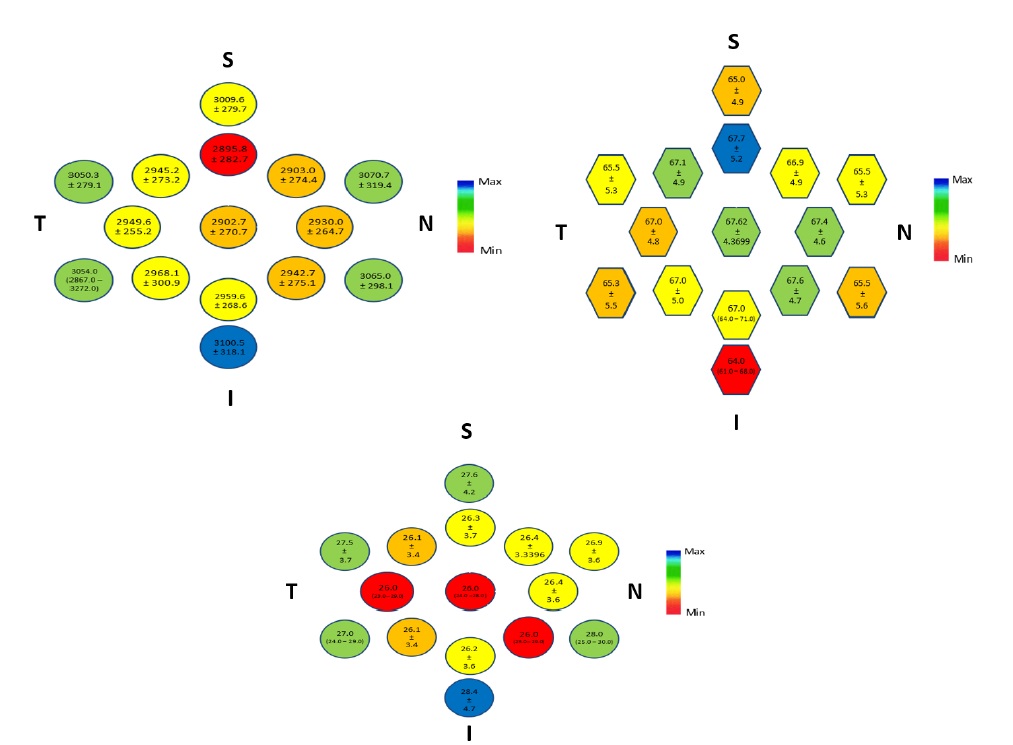