Background: Many studies have used functional optical zone (FOZ) as a measure to compare different refractive laser treatment modalities. However, to our knowledge, no study has compared wavefrontoptimized (WFO) and wavefront-guided (WFG) laser in situ keratomileusis (LASIK) using FOZ. We compared the FOZ after WFO versus WFG LASIK in patients with myopia and myopic astigmatism.
Methods: In this prospective comparative study, we included 100 myopic eyes of 50 patients with or without astigmatism. They were divided into two groups according to the platform used: WFO or WFG femtosecond LASIK. Using Holladay’s equivalent keratometry reading (EKR) report of Pentacam HR, FOZ was defined as a zone centered on the pupil center with a standard deviation (SD) of 0.5 D, around the mean EKR. The differences in FOZ between the two platforms were analyzed at 3 months postoperatively. Visual acuity, refractive error, corneal asphericity (Q-value), and root mean square of higher-order aberrations (RMS for HOAs) were evaluated and compared.
Results: The mean ± SD of patient age was 26.64 ± 5.67 years. The preoperative characteristics of the two groups were comparable (all P > 0.05). The intended optical zone (IOZ) was 6 mm in both groups. The mean laser ablation depth was significantly greater in the WFG group (18 micrometre per D) than in the WFO group (16 micrometre per D) (P = 0.035). At 3 months postoperatively, the mean ± SD of FOZ diameter was 4.32 ± 0.94 mm (71.99 ± 15.68% of intended optical zone) in the WFO group and 4.16 ± 1.13 mm (69.33 ± 18.78% of intended optical zone) in the WFG group, with no significant difference between the two groups (P = 0.622). The change in corneal asphericity was greater in the WFG group than in the WFO group (P = 0.034). Postoperative mean corrected and uncorrected distance visual acuity, manifest refraction, and RMS for HOAs showed no significant difference between the two groups (all P > 0.05).
Conclusions: We found that WFG LASIK resulted in greater ablation depth and change in corneal asphericity than WFO LASIK at 3 months postoperatively. However, there was no significant difference in FOZ diameter, refractive error, and RMS for HOAs between the two groups. Further research is needed to confirm these findings. 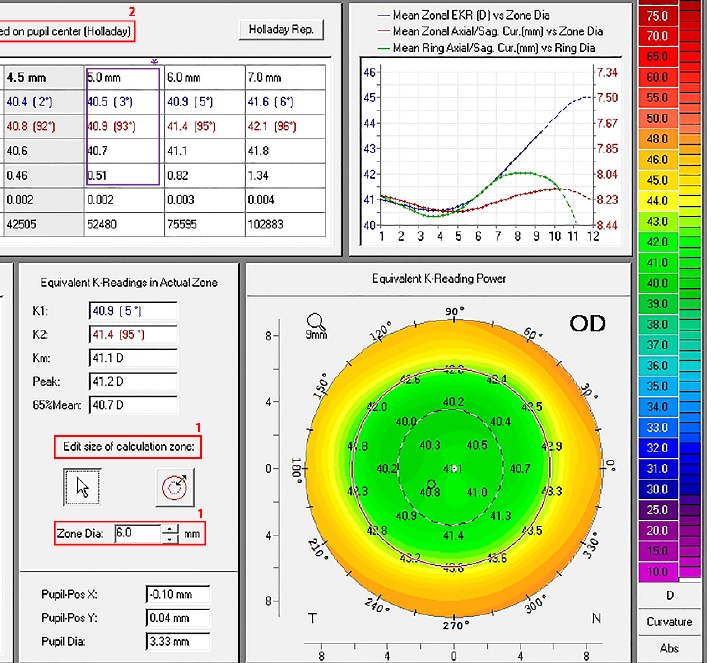