Background: Surgical procedures are used as 1 of the main treatment modalities for pediatric glaucoma, even though progression may occur. In this study, we aimed to investigate the risk factors affecting the progression of pediatric glaucoma.
Methods: In this retrospective cohort study, we reviewed the medical records of patients diagnosed with pediatric glaucoma between April 2009 and March 2017. Pediatric glaucoma patients who underwent regular follow-up for at least 1 year were included. Demographics, intraocular pressure (IOP), central corneal thickness (CCT), axial length (AL), cup-to-disc ratio (C/D ratio), corneal diameter, type of glaucoma, age at time ofdiagnosis, and age at surgery were recorded. Progression was defined as an increase in AL > 2 mm, C/D ratio > 0.2, or corneal diameter > 1 mm during 1 year of follow-up.
Results: Eighty-three eyes from 46 patients were included: 37 eyes (45%) with primary congenital glaucoma (PCG), 46 eyes (55%) with secondary glaucoma, and 27 of these 83 eyes (32.5%) showed progression. Progression was comparable between eyes with PCG and secondary glaucoma (PCG, 22%; secondary glaucoma, 41%; P = 0.152). Age at the time of diagnosis and age at the time of the first surgery were significantly lower in the eyes with progression (P = 0.046 and 0.012, respectively). The mean ± standard deviation of surgeries in progressed versus non-progressed eyes was 1.88 ± 1.1 versus 1 ± 0.8 (P = 0.015). The frequency of comorbid systemic disease was significantly higher in patients with glaucoma progression (P = 0.043). The progressed and non-progressed eyes were comparable in terms of other demographic characteristics and ocular parameters (all P > 0.05).
Conclusions: Pediatric glaucoma patients who were younger at the time of diagnosis and the first glaucoma surgery and those with comorbid systemic disease are at higher risk of glaucoma progression. These findings are useful for clinicians when counseling parents of children with pediatric glaucoma about disease outcomes. However, future prospective studies with larger sample sizes and longer follow-up periods are needed to confirm our findings. 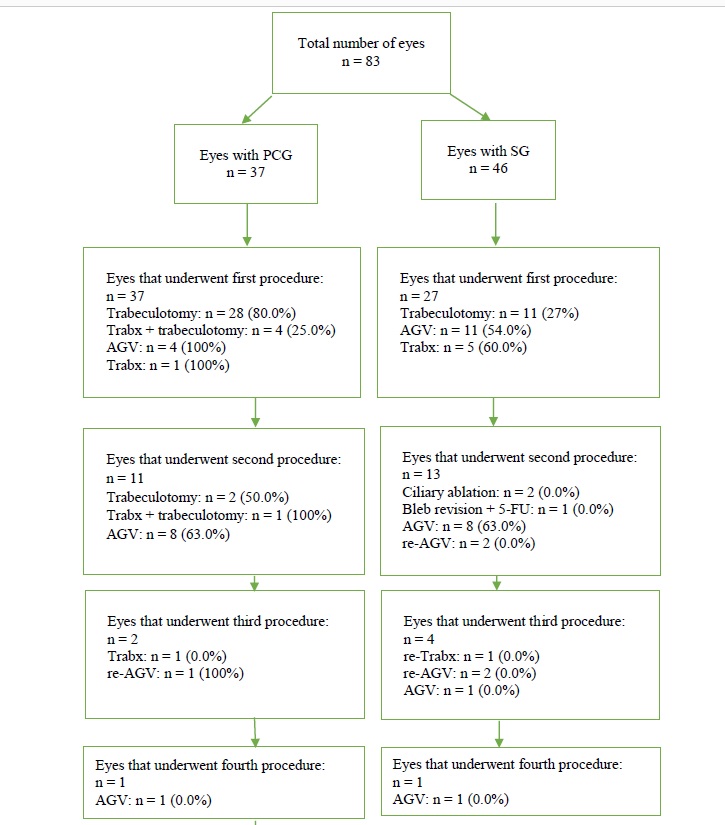