Background: Cystoid macular edema (CME) is the leading cause of permanent visual impairment in patients with uveitis, particularly in patients with intermediate uveitis (IU). This study was aimed at comparing the changes in the macular microvasculature in patients with IU with uveitic non-responsive CME and without macular edema.
Methods: In this case-control study, 55 eyes of patients with IU were assessed for macular microvascular structures, including vascular density, foveal avascular zone (FAZ) measurement, and vascular morphological changes, using spectral-domain optical coherence tomography angiography (OCT-A) with the AngioVue OCT-A system. We divided patients into the following two groups: the case group, including 30 eyes with IU-related non-responsive CME, and the control group, including 25 eyes with IU without macular edema.
Results: Participants in the case and control groups had comparable age (P = 0.753) and sex (P = 0.124) distributions. Superficial capillary plexus vessel density in the case group was significantly decreased in the whole image (P = 0.027) and the parafoveal area (P  = 0.001) compared to the control group. However, there were no statistically significant differences between the two groups in terms of foveal superficial vessel density, deep capillary plexus vessel density, FAZ area, FAZ perimeter, FAZ acircularity index, or foveal vessel density in a 300-µm-wide annulus around the FAZ (all P > 0.05). Vascular morphological changes, such as the capillary tuft, telangiectatic vessels, or micro-aneurism, were not different in the overview images of the OCT-A printout between the two groups.
Conclusions: The mean superficial capillary plexus vessel density was lower in eyes with IU-related nonresponsive CME than in those without macular edema. We observed more cystoid spaces in SCP than in DCP. Microcystic changes in the inner retina and ischemia may be the underlying cause in eyes with nonresponsive CME. Future prospective longitudinal studies with healthy, matched controls are warranted to confirm our findings. 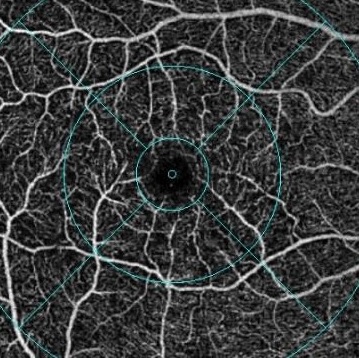