Background: Vortex keratopathy is a corneal entity characterized by corneal deposits at the level of the basal epithelium in the form of a whorl-like pattern in the interpalpebral portions of the cornea. Medications such as amiodarone, chloroquine, hydroxychloroquine, indomethacin, phenothiazines, ibuprofen, and naproxen bind to the cellular lipids of the basal epithelial layer of the cornea, producing a characteristic whorl pattern. Here, we report a case of bilateral central vortex keratopathy with slight vision impairment 3 weeks after uneventful photorefractive keratectomy (PRK) in a woman on long-term clozapine treatment.
Case Presentation: A 42-year-old woman presented to the outpatient clinic for refractive surgery for the correction of bilateral moderate myopia. Her best-corrected distance visual acuity was 20/20 in both eyes. She had been on antipsychotic clozapine tablets 400 mg/day for the past 6 years to manage a psychiatric disorder. On detailed preoperative slit-lamp examination, her corneas were clear, with perilimbal conjunctival pigmentations. Other ocular examination results were unremarkable. At the 3-week follow-up after an uneventful PRK, her uncorrected distance visual acuity was 20/25 in the right eye and 20/20 in the left eye, with complaints of slightly unclear vision in both eyes. Slit-lamp examination revealed bilateral corneal subepithelial deposits in a whorl-like pattern reminiscent of vortex keratopathy. The deposits were restricted to the epithelial and subepithelial regions and did not extend to the stroma without evident stromal haze. Dilated fundus examination results were normal bilaterally. Despite excellent refractive outcomes and visual acuity in both eyes, she was dissatisfied and complained of unclear vision. She was administered with lubricating eye drops and placed on regular follow-ups. At the 4-month follow-up, the vortex lines were cleared centrally, and she reported improvement in vision. Anterior-segment optical coherence tomography of the cornea revealed no epithelial deposits in the central part of the cornea and residual deposits in the temporal peripheral cornea, indicating clearing of the deposits from the central cornea and explaining the subjective improvement in vision. Her final best-corrected distance visual acuity was 20/20 in both eyes with an unremarkable ocular examination.
Conclusions: Our case indicates a potential causal relationship between long-term clozapine treatment and development of temporary, visually significant vortex keratopathy after uneventful PRK. Further large-scale studies are required to verify the causal relationship between the long-term clozapine administration and the development of vortex keratopathy following surface ablation photorefractive procedures.
Keywords: 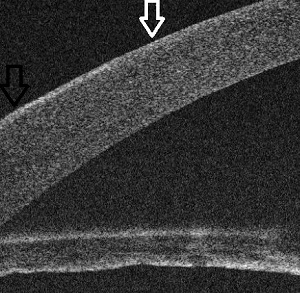