Congenital colour vision defects affect about 8% and 0.5% of the male and female population, respectively. Pseudoisochromatic Ishihara plates have shown to be successful in an early diagnosis of colour vision defects. This commonly used colour vision test was initially intended to identify those who suffered from red-green aspect of congenital colour blindness; however, it may be of use to reveal acquired colour vision defects as well. Despite the Ishihara plates’ value, there are a number of shortcomings in their current layout. We proposing a new colour plate modified from original Ishihara test. To best assist illiterates who are not able to read English, standard Ishihara plates have been translated to Eastern Arabic numerals, which are used in most parts of the Middle East, Central Asia and Africa populations. The purpose of the present modification was to present the new plates to these regions, but more research and study is required to work on the validity, reliability, and repeatability of these new plates. 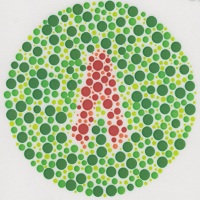