Background: At completion of transepithelial photorefractive keratectomy (t-PRK) surgery, the eye is usually fitted with a bandage contact lens to reduce discomfort and promote epithelial healing. This study aimed to compare the outcomes of eyes fitted with lotrafilcon B versus comfilcon A, silicone hydrogel bandage contact lenses after t-PRK for the correction of low to moderate myopia, with or without astigmatism.
Methods: In this comparative, prospective study, patients with myopia < -6 D with or without astigmatism (< 1.75 D), who underwent t-PRK between January and June 2018, were randomly allocated to the lotrafilcon B and comfilcon A groups. Preoperative characteristics, including age, sex, eye treated, uncorrected visual acuity (UCVA), best-corrected visual acuity, mesopic pupil size, central corneal thickness, and refractive error were recorded. Postoperatively, pain score, UCVA, and corneal epithelial defect size on days 1, 4, and 7 were compared between the two groups.
Results: Twenty-nine eyes were included in each group. Demographic characteristics and preoperative measurements were similar between the two groups. UCVA was significantly improved on day 7 as compared to day 1 in the comfilcon A group (P = 0.03), but remained the same in the lotrafilcon B group (P = 0.70) as on day 1 postoperatively. There was no significant difference in UCVA between the two groups at any follow-up visits (all P > 0.05). The pain score on the first postoperative day was significantly higher in the lotrafilcon B-fitted eyes than in the comfilcon A group (P < 0.001), but was significantly reduced in both groups compared to day 1 (both P < 0.001). The epithelial defect in the comfilcon A group was significantly greater than in the lotrafilcon B group (P < 0.001) at day 1 postoperatively, with significant improvement in both groups (both P < 0.001).
Conclusions: Healing responses were better with lotrafilcon B than with comfilcon A bandage contact lenses. The patients had a greater mean pain score with lotrafilcon B than with comfilcon A lenses on the first postoperative day, yet the final outcome was comparable between the two groups. We did not encounter any postoperative complications related to contact lens wear. 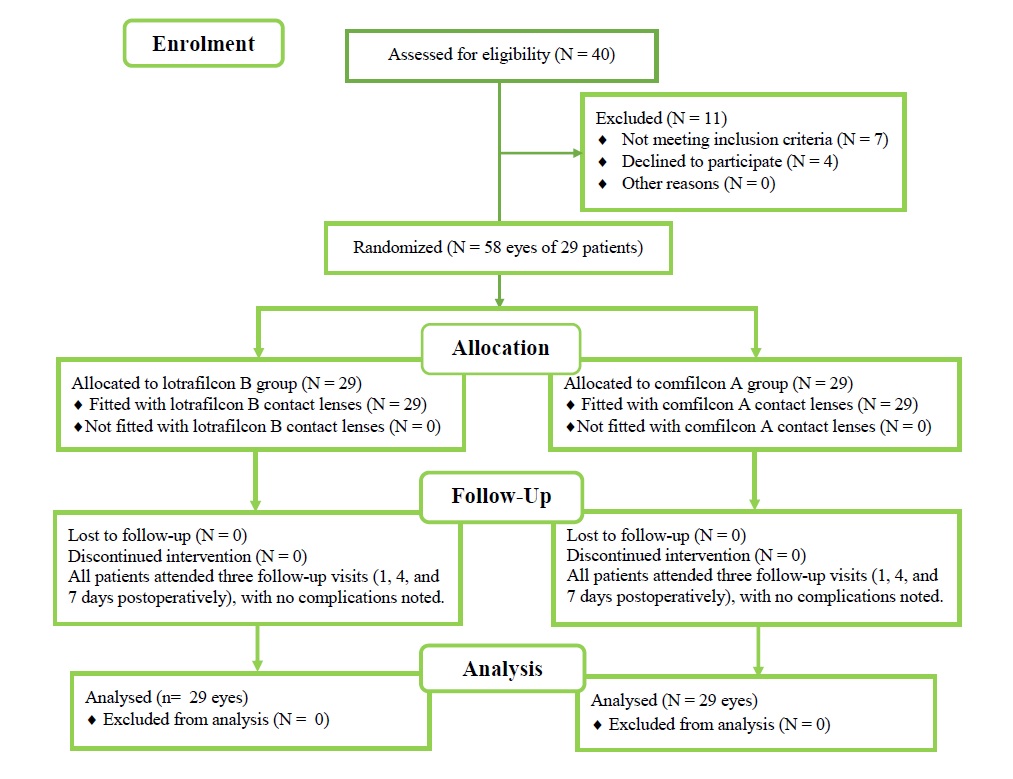